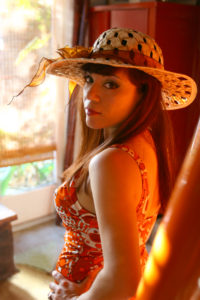 Award-winning singer and musician Sofy Encanto is a veteran of the Miami music scene. During her 12-year tenure as the lead vocalist of the tropical soul band The Elastic Bond, she has collaborated on dozens of songs, and co-produced three albums, helping to earn the group recognition from Billboard Magazine, NPR, PRI The World, and the Los Angeles Times. In 2018, she shared the honors of a Grammy nomination with Venezuela’s world-renowned Latin alternative band Los Amigos Invisibles when their album El Paradise was nominated in the Best Latin Alternative/Rock album category. Encanto co-wrote and sang on the album’s track “Esperame.”

When she’s not on stage, Encanto is out teaching others what she knows by serving as a private voice and music instructor. It all began as a child in her native Honduras. At family gatherings, her uncle would serenade the relatives by playing guitar and singing nostalgic boleros. Encanto learned to do the same for her young neighbors. When her babysitter wouldn’t let her out to play with other kids, she’d lure them to her front door of her house by singing along on a microphone to her dad’s Spanish and American pop records.

Encanto came South Florida as a teenager in the early 1990s, and in 2004, she obtained a business degree with an emphasis on creative performance at Miami Dade College, where her project was recognized as Music Business of the Year. In addition to her work as a musician and private instructor, she has participated in numerous workshops and volunteer projects aimed at using music to elevate the community’s quality of life. For her work and leadership in music, the City of Miami presented her and her bandmates with a Proclamation Award for elevating Miami’s artistic and cultural life.