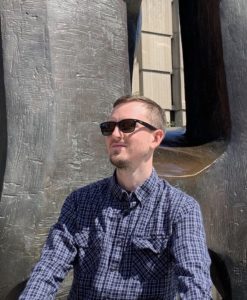 Mike Sullivan is a guitarist, bassist, educator, composer and audio engineer based in Chicago. After completing a degree in Jazz Guitar Performance at the University of Miami in Florida, he worked as a freelance musician/educator for several years before returning back to his hometown of Chicago to study and obtain a master’s degree from The School of the Art Institute of Chicago.

Mike’s versatility and experience has led him to work in many different areas of Chicago’s music and arts communities, including collaborations with the Ravenswood-based Experimental Sound Studio. Most recently, his work in sound design and film scoring was selected to be displayed at Chicago’s Museum of Contemporary Art as part of their Chicagoland Shorts series. In addition to engineering and composing, Mike maintains a busy career as a freelance musician and is excited to further Guitars Over Guns’ mission by teaching music to the next generation.