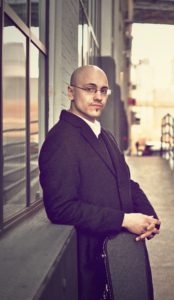 Guitarist Mark Anderson is an active performer, composer and arranger in Duo Tandem (with Necati Emirzade), an instrumental guitar duo with a focus on storytelling through music. Their music has been hailed as a “new and exciting polyglot” (Classical Guitar Magazine) and a “wonderful melange” (Minor7th.com), with their latest album Watching the World Go By being chosen as one of the top 10 albums of the year (2018) by Classical Guitar Magazine.

Mark has performed throughout the United States and Europe including at The Freight and Salvage in Berkeley and at the historic Bellapais Monastery in Cyprus with the president of North Cyprus, President Mustafa Akıncı, in attendance. He has also premiered many works for guitar including “Inventions on Um a Zero” (written for Duo Tandem) by João Luiz and “Rising Spirals” by award-winning composer Chinary Ung (U.S. premiere).

In addition to mentoring with Guitars Over Guns, Mark is currently on faculty at Millikin University, Illinois Wesleyan University and the Academy of Movement and Music, as well as maintaining a private studio in Chicago.