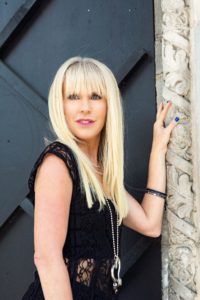 My name is Kim Cameron, or otherwise know as Side FX.

My passion is telling stories through music. I grew up a few miles from the white sandy beaches of southern California, so in-between boogie board surfing, I marched in a band with my clarinet; performed in school musicals; sang in the choir, played in a cover band; and DJ’d at a dance club and a radio station.

Unfortunately, when it came time to pay back those college loans, and deliver a rent check, I found myself leaving the true love of my life: music. I went down deep into the dreaded corporate world. After years of long hours (and I mean long), weekends, holidays, late nights; I found few rewards, and ran into a lot of glass ceilings.

After watching a family member battle cancer and frustrated with what I had compromised, I took a deep look at what drives and fulfills my soul. I made a giant leap of faith, betting on myself. Scary? For sure! But, today, I have written 8 albums, (Contradictions, Turning Point, The Blond Side, Spin Me Ever After, Still Spinning, My Memories of Christmas, No Regrets, Naturally Yours), completed three tours; 21 States, Caribbean and the UK. I found outstanding band mates on both coasts, created a publishing company, and am the only indie artist who has charted 5 songs on a single album and hit Billboard Top 20 twice!

I had a dream come true in 2011 when I sang the National Anthem for the Washington Redskins game on NFL’s 50 yard line, and, in 2012, my two of my music videos took off into cyber space giving me over 2 million views. Crazy, right?

In 2014, I found myself in new roles, including one with a major motion picture, more Billboard success, producing a new TV series and a cartoon series, a new single which hit #1 on music charts, singing the National Anthem for the NY Giants, and more puppet shows!

2015 was a year that I could not be more grateful to those who have supported me through my journey. I could have never experienced one of my bucket list (performing on my largest stage on New Year’s Eve in the Dominican Republic) without my team. And, now, I begin a new year. A year that, already, will be filled with travel, adventure and much joy.

I began this adventure to create music that will make you cry, smile, dance in the kitchen and think about life a little differently.

For me, my music is an image of me, and those who have touched me; musical stories that others can find themselves in.

There are so many great stories left to write, left to be told.