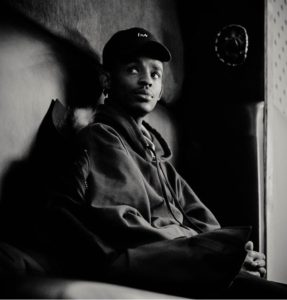 Kenneth “Disrupt” Clair is a producer and engineer who has developed his voice through collaboration with a multitude of artists and local nonprofit organizations. By the time he graduated from Chicago’s Little Village-Lawndale High School, Kenneth had already gained experience with Better Boys Foundation and Beats & Bars, a music and mentoring organization he co-founded with his teacher. With musical influences ranging from David Bowie and Quincy Jones, to Kanye West and Queen, Disrupt has learned both the importance of producing and mixing a record, and developed his chops under Add-2 and Dennis Thompson at Guitars Over Guns’ Haven Studio. As a youth mentor, audio engineer, producer and musician, Disrupt now works for Loop Theory, Inc., assisting with artist management, style, and development, helping to create the sound for our next generation.