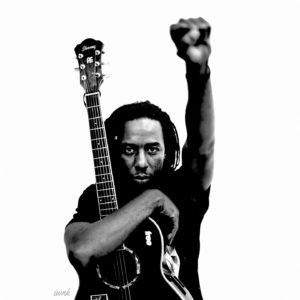 James Valsaint was born in the neighborhood of Little Haiti in Miami, Florida. After graduating high school, he traveled the world, first to Barcelona where he managed a company and then to Amsterdam where he earned a Bachelor’s Degree in Audio Engineering. Upon returning to the States, he worked with Greenpeace in LA to fight against deforestation and offshore drilling. Back home in South Florida, James got involved with both the Occupy Movement and Black Lives Matter, with a focus on ending the school-to-prison pipeline. James has always been both an artist and an activist who believes in utilizing the power of music and love to overcome social hardships and uplift his community. He now works with Guitars Over Guns as a mentor at North Miami Middle and Senior High School where he teaches guitar and spoken word poetry.