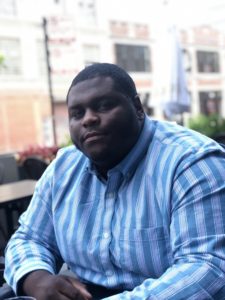 Isaiah Garner hails from the West Side of Chicago, where he attended Urban Prep Charter Academy for Young Men – West Campus. Isaiah attended Dillard University in New Orleans, Louisiana, where he earned his B.A. in Psychology in May of 2019. Attending college had a monumental impact on his life, specifically attending an HBCU. During college, he served as Vice President of a student organization called Black Tide. This allowed him to realize that he had a deep desire to create and provide opportunities for the student body to have an open space for expression and acceptance. The organization implemented weekly open mics that became a staple to singers, dancers, rappers, painters, poets and students with other artistic mediums. This venue allowed participants to showcase their talents, and also have a safe space to express themselves without judgement. Isaiah credits this experience as a great opportunity to blend both his passion for music and his love of helping others. In addition to Black Tide, Isaiah co-founded and was a student leader of a movement called Men of Dillard. The purpose of Men of Dillard is to unite and mentor young men on campus.

Immediately after graduation, Isaiah began working for EMBRACE Upward Bound as a college readiness teacher/student mentor. EMBRACE offers classes during the summer and during the school year to assist low-income, first-generation college-bound high school students in the successful completion of secondary education, and to prepare them academically and socially for enrollment and completion of higher education. In July of 2019, Isaiah was accepted into Public Allies, and he also joined the Guitars Over Guns family. As an artist, Isaiah goes under the artist name “Iso.” He has two projects available called “i3” and “INNERmission,” and can be found on all social media platforms (@isozus_).