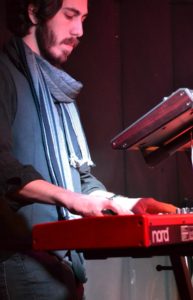 Hailing from Miami, Florida, Gene Gayol is an alumnus of Miami’s New World School of the Arts and a musician and plays in a variety of genres. 2015 sees Gene hitting the road with Rock and Roll Hall of Famer Terry Johnson, as well as recording his own debut album. Gene has had the pleasure of performing in concert and on television with Latin Grammy and Platinum award winning recording artist David Bisbal, and has worked in the Miami and Los Angeles music scenes. A quote from an author that Gene loves, “We have to continue to learn. We have to be open. And we have to be ready to release our knowledge in order to come to a higher understanding of reality.” -Thich Nhat Hanh”