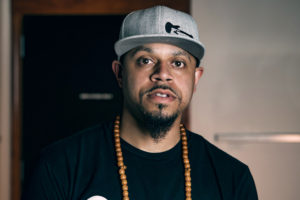 The epitome of a “student of the art,” Chicago-born MC, producer, teacher and originator Dominic “I.B. Fokuz” Pettis EL basks modestly in the knowledge afforded him by his study and practice of hip-hop expression over the last 20 years, a knowledge he still learns to master daily. This burgeoning artist is an aesthetically daring writer who has proven that he can display in his words an integration of urban street-level narratives with abstract concepts in ways that draw in a variety of audiences to his spectacle of rhythmic speech.

In his early thirties, I.B. has already released two self-produced, internationally distributed, full-length albums and an EP for his respective crews, several solo projects, genre-bending mixtapes and 6 years of experience writing jingles for one of the top advertising agencies in the world, Leo Burnett. From his humble beginnings as a mentee with Young Chicago Authors, everything has come full circle for him as he continues to give back lecturing and performing at multiple colleges, as well as mentoring inner city youth as a Site Coordinator for Guitars Over Guns.

I.B.’s resume is nothing short of stellar not because of his accomplishments, but because of his insatiable drive to consistently evolve to greater perfection in spite of these major triumphs.