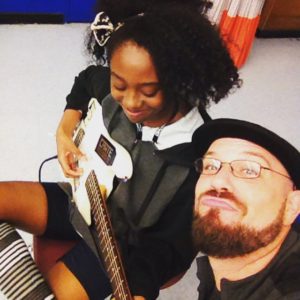 Danny Hayoun is one of the most versatile guitarists in South Florida. From his musical leanings to his love of all things artistic and creative, variety and diversity are his two most prominent criteria. Growing up in Israel and eventually moving to Miami, Danny took up the guitar at 14 and was weaned on heavy metal and progressive rock music. He then began his foray into a multitude of other styles while attending Berklee College of Music in Boston. Some of his musical influences include Jimi Hendrix, Jeff Beck, John Scofield, Marty Friedman, Greg Howe, Tuck Andress, Charlie Hunter, Oz Noy, Wayne Krantz, Kenny Burrell, and David Gilmour, to name a few. Danny has worked with such diverse artists as Lionel Richie, UB40, John Scofield, Pat Metheny, Exodus, Malevolent Creation, The Allman Brothers and many more. He teaches privately and performs extensively in various corporate and top 40 bands in the tri county area, as well as many solo, duo and trio gigs, ranging from jazz to pop to rock, all played with his unique and eccentric style. Danny also plays the bass and produces in his home studio, and, apart from his musical abilities, is also a visual artist. A versatile and multi-talented individual, he prides himself on being original and fun, traits that can definitely be found in his work.