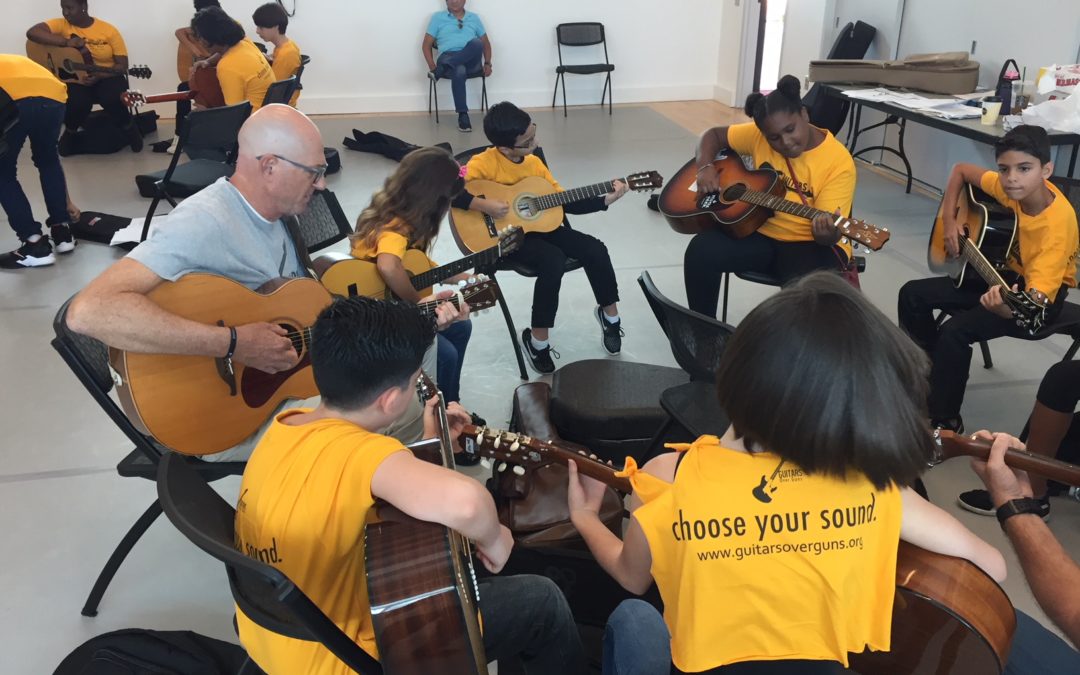 This July, we hosted a five-week summer intensive at the South Miami-Dade Cultural Arts Center to teach local youth how to play the guitar. Guitars Over Guns mentor Sean “Birdman” Gould taught the youngest group of ten students, who ranged in age from 8-13. In addition to teaching the students, some parents also joined in to learn how to play the guitar with their kids.

“The kids and their parents working together was really inspiring to witness. Communicating through learning music,” Birdman said about the experience.

Over the five weeks, Birdman’s students were able to learn two songs completely and from memory. These two songs, “I Want Candy” and “Jamming in the Night,” were both performed in the showcase at the end of the camp. The latter song was actually conceived and written by Birdman’s students during the camp. The song was composed by the students on a bit of a whim. Originally, the students were learning a different song that turned out to be too difficult for beginners. As Birdman was teaching the students the basic guitar chords, they were inspired to write and arrange their own song, “Jamming in the Night.”

Writing their own original song wasn’t the only accomplishment that impressed Birdman. One day, a student named Symphony came up to Birdman and said she created her own syncopated strumming pattern. Her reasoning? “The original one was too boring.” This showed that she was truly interested in music, and might become an aspiring songwriter.

When asked about the most rewarding moment of the entire camp, Birdman said the answer was easy: seeing the parents respond to their newly learned skill and the work their kids had done. “Seeing the musical growth the students showed over the course of the summer camp was extremely fulfilling,” he said.