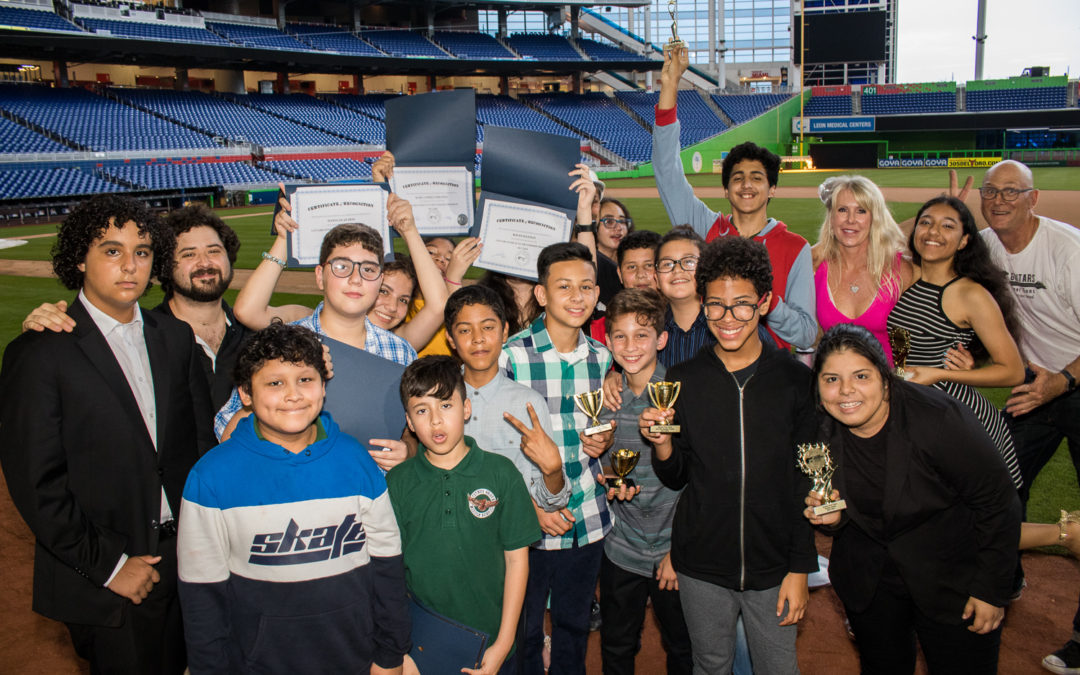 2018 Annual Report on Guitars Over Guns

Guitars Over Guns Organization is grateful for the tremendous individual and institutional support during 2018. Founded in 2008 by Dr. Chad Bernstein, Guitars Over Guns has employed over 60 professional artists and musicians to provide positive outlets of expression for over 3,000 students throughout under-resourced neighborhoods in Miami and Chicago, establishing its reputation as a leader in arts education and mentorship. By providing high-quality music instruction, community-based performance opportunities, and meaningful relationships between professional musicians and youth, Guitars Over Guns is on a mission to cultivate the next generation of empowered students, artists, and local leaders.

Led by 40 professional musician mentors, Guitars Over Guns provided mentorship for more than 700 youth in 24 unique programs at 16 school and community sites during the 2017 – 2018 school year. Affirming its commitment to community engagement as well as building camaraderie and teamwork among students, the youth bands performed in 80 community performances, 60 in Miami and 20 in Chicago. For the second year, Miami held a graduation at Marlins Park on May 29, 2018 featuring live performances with hundreds of youth, mentors, and beloved family members celebrating their accomplishments.

One capstone highlight of the programs is the professional music videos produced and performed by youth. In Miami, students from several program sites throughout Miami-Dade County came together over Spring Break 2018 to record their own version of “Can’t Stop the Feeling” by Justin Timberlake. This video, recorded at Noisematch Studios, (the Wynwood-based recording studio known for producing the hit song “Despacito”), was directed by Dre Torres, and was filmed at Jose de Diego Middle School. In Chicago, 6th – 8th graders from Evergreen Academy Middle School on Chicago’s South Side produced and performed the song “Beautiful” by Christina Aguilera. Lastly, the alumni band “Unistiq” performed “Valerie” by The Zutons and two other adaptations of contemporary songs live on March 2, 2018 at Ransom Everglades School as part of TEDxCoconutGrove’s “EUREKA,” an independently organized TED event.

While many student success stories stand out, one in particular illustrates Guitars Over Guns’ program at its best. Jakaree, a high school junior from Miami’s inner city and a student in the music mentorship program, was invited to compose and perform the rap section of Elsten Torres‘ latest release, “Never Again”. Torres, an award-winning, Cuban-American, 2-time GRAMMY-nominated singer/songwriter, created “Never Again” as a direct and timely response to the recent mass shootings that have plagued America’s school system and society. He invited Jakaree to write and perform an original rap within the song. “Never Again” features several children from the North Miami elementary school system lending their voices to sing the impactful chorus: “Say never, ‘til it never happens again”. They are also featured in the music video, alongside teenagers and youth activists from the Greater Miami area.

In addition to its programs during the school year, Guitars Over Guns held summer camps in both Miami and Chicago in 2018: a Summer Arts Leadership camp at North Miami Middle School, a Summer Guitar Intensive at South Miami-Dade Cultural Arts Center, and an alumni camp at Evergreen Academy in Chicago for graduates interested in returning to their alma mater as peer mentors in the 2018 – 19 school year.

In early August, 2018, Miami and Chicago teams gathered at Camillus House headquarters for its annual mentor training retreat – affectionately known as the “Family Reunion” – for two days of learning and growth. Presentations were delivered by senior staff to help mentors prepare for the coming school year. Guest speakers from Miami and Chicago institutions including Maven Leadership Collective and Teach For America, worked with mentors to delve into challenging topics and build their skills as leaders. They also introduced Miami-based clinical social worker Sloan Braun-Lorenzini who provided vital mental health training to staff. Sloan continues to be a year-round resource for mentors providing ongoing consulting as it relates to the cognitive, behavioral, and emotional wellbeing of students.

This past year, the Guitars Over Guns family continued to grow, hiring a Director of Development, Josh Flanders, who brings nearly 20 years of fundraising experience working in both Chicago and Miami. A former high school English teacher, Josh quickly progressed to working in the nonprofit sector, founding the Chicago Institute for the Moving Image (CIMI) and the Festival for Cinema of the Deaf, the first of its kind. He later worked for other world-renowned film festivals as well as nonprofits focused on youth, education, and the arts.

Guitars Over Guns also hired a new Regional Director for Miami, Walker Moseley. Walker brings extensive experience working as an educator with City Year and with Drexel University’s School of Education. He completed a master’s degree in Public Administration and Organizational Development and, while in graduate school, was a Leadership Fellow with the Wharton School of Business and worked for the Committee of Seventy, a think tank focused on ethical governance. Just after joining the organization, Walker was accepted into the inaugural cohort of Miami’s Next Leaders, a premiere leadership fellowship focused on social entrepreneurship for a more connected and engaged Miami community.

Desiree Bannister was brought on and is working as a Program Supervisor to oversee the Children’s Trust grant. Desiree is completing a Masters in Nonprofit Arts Administration at University of Miami and, as her work/study project, she will coordinate the annual Miami music video project.

In June, Guitars Over Guns appointed Shelley Gupta as Chicago’s founding RISE board President. R.I.S.E. (Reach. Inspire. Support. Empower.) is a twist on the traditional model for young professionals boards. RISE pairs Guitars Over Guns program graduates with young professionals invested in guiding students on activities, academics, college admissions, and scholarships, all of which translate to post-high school success. A consultant by day and vocalist by night, Shelley has hit the ground running, vamping up the RISE presence in Chicago by recruiting and appointing six board members and six mentors over a period of five months.

Chicago mentor Phil Jacobson has taken on a new role as Community Partner Specialist. In addition to his work as Site Coordinator at Evergreen Academy, Phil has been a force in recruiting and maintaining relationships with new mentors and nonprofit partners by leading the charge in developing Chicago’s quarterly “New Mentor Mixers”. RISE mixers have connected teaching artists and leaders from nearly 20 arts and education-based organizations for evenings of meaningful networking, conversation, and performance. Most importantly, they have facilitated the growth of the Chicago mentor team from 11 to 16 in less than a year’s time, thereby allowing the opening of two new Guitars Over Guns school sites in 2018.

From November 30th – December 1st, 2018 Board of Directors met for an annual strategic retreat to continue to chart and build the future of the organization, hosted by the Hyatt Regency Coral Gables. This dynamic weekend was facilitated by Susan Galler of The Galler Group, and also featured guest speakers Dominick Quartuccio, author of Design your Future, and Paul Becker, Rear Admiral, USN (Ret.), CEO of The Becker T3 Group.

Miami Herald – “This local group helps kids grow with music. On Friday, they will sing at Marlins Park”, July 12, 2018

My Brother’s Keeper Alliance, an initiative of the Obama Foundation, has recognized Guitars Over Guns as a Community To Watch, following a competitive search for “national models to expand evidence-based initiatives to reduce youth violence, grow effective mentorship programs, and measurably improve the lives of boys and young men of color.” The focal point of this recognition is Chicago’s Haven Studio, led by Guitars Over Guns mentors Andre “Add-2” Daniels and Dennis Thompson. Since taking root in the Bronzeville community in 2016, the Haven has served as an incubator for intensive music instruction and mentoring practices, blazing a new trail for innovative programming for youth aged 18-24. A vote of confidence from the Obama Foundation is validation of the investment made into work we know is effective, even if it does not fit a conventional approach.

The organization has been selected to join the Music Access Fellowship’s first cohort, partnering with Teach For America, to build a pipeline of talent and to help maximize its impact and reach.

An alum of the Evergreen Academy Middle School site, Yailin Rojas was recently recognized by the City of Chicago’s Department of Cultural Affairs & Special Events (DCASE) as a member of the Rising Stars Honor Roll, a group of 30 exceptional youth who demonstrate creative leadership and serve others through the arts. Yailin was nominated by her mentors Sarah Robinson and Phil Jacobson, who joined her to attend a very special reception on August 8th, 2018 headlined by the Mayor and First Lady of Chicago, along with other city officials. Though Yailin began high school this Fall, she continues to return to Evergreen once a week as a member of its Alumni Band and Peer Mentorship group.

Miami Marlins and AutoNation presented two deserving members of the Guitars Over Guns family with brand-new cars. The first went to Travilia Bogan, mother of two middle school students in the organization’s program, has faced mobility challenges following an injury last year. The second went to Leo “DaVincci” Mayorga, a mentor who has recently faced health challenges, sometimes relying on a 4-hour public transit round-trip to mentor his students.

On September 14th, 2018, the 2nd Annual Jimmy Ranoha Memorial Golf Tournament took place raising over $75,000 for its Chicago programs. The day included golf, dinner, dancing, an auction, and live music performed by Chicago mentors. As a highlight, Ricardo, a recent alum of the Chicago program, accepted the “Gimme a Jimmy” Award in recognition of his accomplishments in music and as a future leader.

On November 10, 2018 Guitars Over Guns celebrated its 10-year anniversary with the annual Choose Your Sound Benefit Concert at the University of Miami Student Center. The evening of music, food, dancing, and celebration raised more than $250,000 to grow its arts-based mentorship programs. Then, less than a week later, the Miami community came together again to raise over $82,000 toward organizational programs on Give Miami Day, a program of The Miami Foundation that raised more than $11.5M in one day for Miami nonprofits.

Guitars Over Guns is grateful for all the generous support towards its music mentorship programs in 2018. Together, Guitars Over Guns and its vast array of individual and institutional supporters have helped to ensure that every student has a committed mentor in their lives dedicated to unlocking the potential of these future leaders.