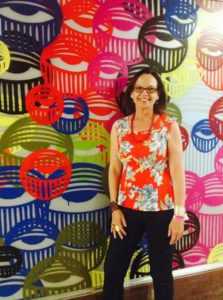 Music has always played an important role in Angela Terrell’s life. Growing up in Jacksonville, Florida, she was part of her junior high and high school choral and ensemble groups, performing her first solo in elementary school. Angela graduated from FSU where she studied TV & Film Production, working for WFSU-TV before, during and after college, while also working as a legal assistant.  She moved to Miami in 1995 and pursued a successful career as a wardrobe and set stylist for TV commercials, fashion catalogs and music videos, furthering her organizational and administrative skills in the legal industry during the summers. After leaving the freelance world, Angela worked for some of Miami’s largest and most prestigious global law firms, learning a variety of software programs and honing the skills required to maximize the time of busy professionals. With her love for music and live performance, she has followed a variety of South Florida artists for over twenty years and been a supporter of Guitars Over Guns since its inception. Combining her loves of music and learning with her exceptional organizing skills, she is proud to be a part of the Guitars Over Guns family and is committed to its organized and successful growth.