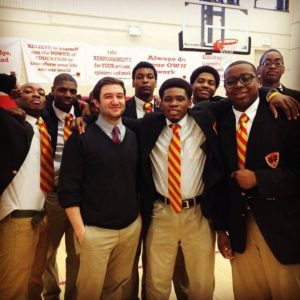 Andrew has long balanced a ‘double life’ between music and education. As an undergraduate in the University of Miami’s School of Education & Human Development, he logged over 700 hours in Miami’s low-income schools and communities, including a culminating student teaching experience at Booker T. Washington Senior High School. He also put his musical talents to work in UM’s Jazz and R&B Vocal Ensembles, and became the first freshman non-major selected for the Jazz Vocal 1 group.

After graduation, Andrew moved to Chicago to join Teach For America, and was employed at an all-boys charter high school on the city’s West Side. While teaching, Andrew developed a passion for shifting and rebuilding adult mindsets around students from marginalized backgrounds, particularly those with disabilities. He also started his charter network’s first sustained extracurricular choir, UPliftment, which twice earned superior ratings at the Illinois ‘Trills & Thirlls’ Music Festival at Six Flags: Great America.

In an effort to better combine his two passions, Andrew joined the GOGO family in the fall of 2015 as a founding mentor and site director at Evergreen Academy on Chicago’s Southside. During this time, he wrote and played music extensively with my acoustic trio, The Shades (@WeTheShades) – all three of whom are University of Miami alumni – and was honored with the unique opportunity to represent ‘Team Adam’ on Season 11 of NBC’s ‘The Voice’.

Following his time on ‘The Voice’, Andrew immediately returned to the Windy City to begin working as Chicago’s founding Regional Director for Guitars Over Guns. In his current role, Andrew hopes to continue striking a balance between his two passions in service of Chicago’s youth.